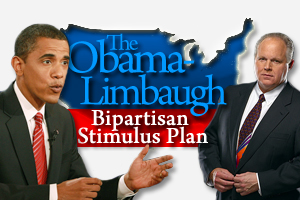 The JohnJacobH RKBA Blog is proud to join the Blogs Who Support The Obama-Limbaugh Bipartisan Stimulus Plan.

While not exactly “government governs best governs least” it offers an interesting test between two schools of economic thought.

These tax cuts will consist primarily of capital gains tax cuts and corporate tax rate cuts. So Obama gets $540 billion to spend his way. The other people of this country who did not vote for his way get $460 billion spent the way they would like it spent. This is bipartisanship! This is how bipartisanship really works. Okay, Obama wins by a 54-46 majority, so he gets 54% of the trillion bucks. Spend it his way. We get 46% of the trillion bucks to spend our way, and then we compare. Then we see which stimulus actually works and works the fastest, and I will guarantee you that if this plan is adopted, just the announcement that $460 billion will go toward paying for tax cuts, capital gains, and corporate tax rates — we could throw in some personal income tax rate reduction in order to make sure that the voters don’t think it’s all about helping the big guys.