Conservatives and Libertarians are frequently plagued by an inability to provide pithy summaries of their outlook in their endless verbal jousts with people of the Bolshevik Persuasion.

In a refreshing change of pace Old school Editorial Commentator George Will provides us one of the best arguments to say “No” I have heard in quite some time.

In short, to say “No”to mischief and inanity is both Constitutional and necessary and people who do so should be proud of their outlook and position.

“Regarding reform, conservatives are vilified as the party of “no.” Fine. “No” is an indispensable word in politics because most new ideas are false and mischievous. Furthermore, the First Amendment’s lovely first five words (“Congress shall make no law”) set the negative tone of the Bill of Rights, which is a list of government behaviors, from establishing religion to conducting unreasonable searches, to which the Constitution says: No.”

So if some Bolshevik de jour approaches you and asks “Why do you say “No” to gun control?” rise up and proudly answer “I say “NO” because the Constitution says “NO” because No is the only thing that stands between “We The People” and Institutional Anarchy.”

“Government governs best that governs least and it is the duty of every Patriot to say No to any government that grows beyond defined Constitutional boundaries.”

“So put that in your pipe and smoke it!” 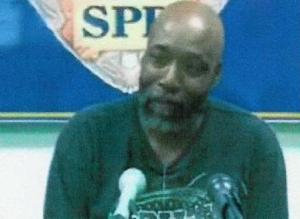 Okay, there are many jokes out there about the mighty .380 cartridge.

In this case the perps laugh not.

So, once again, any gun trumps gunless when mental outlook is sharp and the will to survive prevails.

Always remember and do not ever forget, shot placement is everything.

As the late Colonel Jeff Cooper reminded us all: “You fight with your mind; weapons are accessories.”

Kudos as well to the Police and their affirmative attitude toward the incident.

What would you do if you were staring down the barrel of a shotgun, with a hooded man demanding your money or your life, but all you had in your pocket was five dollars and a .380 pistol?

Here is a very candid, post-shooting incident interview with a man who experienced exactly this situation and the law enforcement officials handling the case.

This was just too cool to ignore. The Bolshevik Bashing will resume shortly.

Tantalizing Excerpt:
Presenting the coolest, raddest, sickest, and baddest toy in the history of toy-making The Amazing Surface Climbing RC Car with Lights – that can climb up walls and race across the ceiling!

It has now been over two months since North Carolina Wildlife Enforcement Officer Mark Minton shot and killed 76 year old Cyde Coffey while Coffey was hunting turkeys on his own land.

In spite of dozens of news reports the North Carolina State Bureau of Investigation has yet to release any information about the case and the county District Attorney has yet to issue any statement about imminent prosecution.

Family members allege Officer Minton was not in proper uniform and the use of deadly force over an alleged wildlife violation was excessive.

Coffey’s family members said Sunday they doubt Minton’s claim that he was provoked. “He was taken from us and he was shot on his own land minding his own business. Who shoots a 76-year-old on his own land?” Coffey’s daughter told WXII12 news.

In a previously issued statement, the commission spokeswoman Penny Miller said: “An armed confrontation with a hunter resulted in Officer Minton firing a shot, apparently in self-defense, which led to the death of the alleged assailant.”

According to the 911 tapes, first responders soon realized Coffey was dead when they got there and described the scene as a madhouse.

informerxxx Posted 12:54 am, 04/12/2009
IT IS SO TRAGIC WHAT HAPPENED SATURDAY, HOWEVER IT COULD HAVE BEEN AVOIDED. I KNOW IN 2003 A TRAPHILL MAN MET MULTIPLE TIMES WITH MINTON’S SUPERIOR OFFICERS AND BEGGED THEM TO DO SOMETHING ABOUT HIS DANGEROUS BEHAVIOR, BUT NO ONE LISTENED. THEY JUST COVERED FOR HIS ACTIONS. I AM SURE MARK DID SHOOT THE MAN OUT OF SELF DEFENSE, BUT WHAT EVENTS LED UP TO THIS WE WILL NEVER KNOW. I KNOW PERSONALLY HOW MARK WILL PROVOKE PEOPLE. SOME PEOPLE DONT RESPOND TO WELL TO THIS BEHAVIOR. IF IT HAD BEEN THE LEVEL HEADED WARDEN, WALSH, WHO WAS NOT FAR FROM MARK WHO MADE THE INITIAL CONTACT WITH THE MAN THE SITUATION I KNOW WOULD HAVE BEEN NEUTRALIZED. MY HUSBAND WAS WITH THE TRAPHILL MAN WHEN HE MET WITH THE WILDLIFE OFFICERS A COUPLE OF TIMES. BILL TOWNSEND, JOHN CAMPBELL, C.D. THOMPSON, ROGER LEGUIRE, AND MAJOR BLANTON, YOU GUYS WERE ALL WARNED THIS DAY WOULD COME, YOU SHOULD HAVE PAID ATTENTION.

At least one old Farmer in North Carolina is tired of the nonsense and has gone to considerable trouble to make his voice heard. Naturally the Oligarchs-in-charge are out to stifle him as quickly and effectively as possible. When old coots are outlawed, only outlaws will be old coots.

Phipps says he put up the display to bring attention to his problems with the government, such as land disputes with neighbors and the way the murder of another son, William Phipps, was handled.

The Liberty Sphere points us to a column from the Conservative Libertarian Outpost which chronicles a dark Machiavellian deal between the NRA ( America’s Oldest Gun Control Organization) and Carolyn McCarthy (gungrabber extraordinaire) to resuscitate the Brady Bill from the grave.

Even many Democrats wouldn’t go near a McCarthy gun bill. They have learned that supporting gun control is a losing issue. Enter Rep. John Dingell (D-MI), the so-called Dean of the House, having served since the Eisenhower administration. Dingell is also a former NRA Board member, and was in that capacity tapped to bring the NRA leadership to the table.

The end result of the negotiations was that this small clique among the NRA leadership gave this bill the support it needed to pass.

Just when I thought I had seen everything!

Word to the wise: pick your training school carefully.

It matters not if these guys are shooting blanks, this is just crazy, meaningless and counterproductive.

I long for the insight of the late Col. Jeff Cooper, known as the gun guru, about this video.

Amazing what occurs around the world with virtually no notice by those of us who say we support and defend the Constitution and the 2nd Amendment.

Watch now this video of a vibrant, exuberant shooting competition as practiced by people who still remember the grim penalties exacted against a population who forget the meaning and purpose of such skills.

To paraphrase the MTV Generation- Call your cable service and tell them “I want my Knabenschiessen TV!”

No, you do not have to understand the language to appreciate the action.

When cops go feral citizens are not even secure in their lives let alone their papers and possessions.

Read now this tale of a cop with a gun and a badge who breaks into the home of a dedicated medical professional and murders her with “multiple gunshots”. She had over 20 years to repent of her crime or even find another line of work.

Remember, “only police and military can be trusted with weapons”.

No doubt these allegations are just the result of a clerical error and will eventually lead to the arrest of the real murderer.

A veteran Los Angeles police detective was arrested Friday in the 1986 Van Nuys killing of her ex-boyfriend’s wife, cracking a cold case packed with the love-triangle twists and forensic drama of a television cop show.

Stephanie Ilene Lazarus, 49, of Simi Valley, was arrested at LAPD headquarters where she worked and booked on suspicion of beating and fatally shooting Sherri Rae Rasmussen, 29, a hospital nursing director.

The slaying occurred on Feb. 24, 1986, at the Van Nuys condominium where Rasmussen lived with her husband of three months, John Ruetten.

Have not sticky posted this to the top recently……