A small victory for knife rights.

Cheaper Than Dirt examines their sales policy and decides the customer is, in fact, correct.

Update: Cheaper Than Dirt read this post and has corrected the issue! I think I feel a six-pack coming my way… Original Post: Do you think the Glock Field Knife is a dagger? Cheaper Than Dirt (CTD) does, and they won't ship it to a customer in my area because of this error. Note that the top edge of the knife past the tip is flat, not sharp or even tapered. Over the years I’ve purchased a lot of good equipment (and some junk) from CTD, includin … Read More

As of now here at JohnJacobH we can neither confirm nor refute Mr. Knox’s allegation.

He clearly states the Fort Worth Star-Telegram briefly reported the presence of an armed Texas Highway Patrolman inside Luby’s Cafeteria at the time George Jo Hennard began his systematic murder of 23 people.

The officer, also described as a Texas Public Safety Sergeant did not draw his weapon because “he was not under direct fire”.

While it has been reported up to 80 people were in the facility at the time the incident commenced, only the dead and wounded have been widely documented.

It is entirely possible the undocumented others who were neither injured nor killed could have had a Highway Patrolman among their number, but for now, this anecdote clearly belongs in the Whiskey, Tango, Foxtrot File.

Readers with access to newspaper archives are welcome to post any research results in the comments section.

“Head Fake” is a term originally used in football wherein the ball carrier fools his attackers into the belief he will run in one direction while he actually takes a completely different path.

Over the years, the term has come to mean any general misdirection or flummery

A perfect term to describe the Democrat Party and their relationship with Republicans and the great dumb masses.

For example, DemonicRats now want everyone from the “mommy party” and “daddy party” to sit boy/girl, boy/girl to hear the State Of The Union Address from our Overlord and Master of the Universe Hussein Obama in a fashion that mimics all the best Star Wars Movies.

This feeble choreography would, of course, serve only to validate some Progressive’s fantasy of bipartisan civility.

As an added benefit the exercise would transmit the message to We,The Trampled,our elected Representatives are contemptuous of basic legal principles used throughout society-the Arms Length Transaction-to name one,and basic Constitutional Precepts used through our history- Checks and Balances- to name another.

END_OF_DOCUMENT_TOKEN_TO_BE_REPLACED 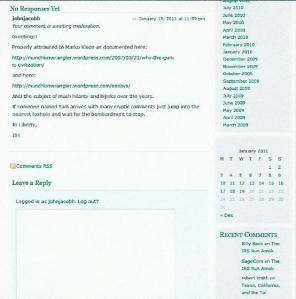 Major Caudill has reappeared (CLICK LINK HERE)and once again I jump into the Munchkin Wrangler Vortex.

While Americans have known about individual Catholics such as Rev. Michael Pfleger’s extreme gun control fanaticism for some time, most have considered him an aberration from Conservative Catholic Doctrine.

Today comes news gun control may have deeper roots in the Vatican and Catholic Faith…….

VATICAN CITY (CNS) — The Catholic Church’s position on gun control is not easy to find; there are dozens of speeches and talks and a few documents that call for much tighter regulation of the global arms trade, but what about private gun ownership?

The answer is resoundingly clear: Firearms in the hands of civilians should be strictly limited and eventually completely eliminated.

But you won’t find that statement in a headline or a document subheading. It’s almost hidden in a footnote in a document on crime by the U.S. bishops’ conference and it’s mentioned in passing in dozens of official Vatican texts on the global arms trade.

UPDATE: As usual, you have to get up awfully early in the morning to beat David Codrea to a hot story! His comments here:

No apologies folks, here at JohnJacobH we are just suckers for yodeling puppets and cowboy songs. (CLICK LINK HERE)Especially when joined by a Miss America Contestant!

Alyse Eady was the only Miss America performance I watched last night! (Really, it was saved on TIVO for my perusal)

Maybe we can get the Music Examiner to look into this for us. (CLICK LINK HERE)

Newsflash: The World Is A Dangerous Place

Hijinks ensued complete with the sound of gunfire.

When the gunfire ceased celebrity politician Congresswoman Gabrielle Giffords barely clung to life while a substantial number of ordinary pedestrians who were unfortunate enough to be in the immediate vicinity sustained significant collateral and incidental damage-to include but not be limited to the death of a nine year girl.

Hardly a surprise to We, the Trampled, who have suffered under this oppression for the better part of a century,the incident nevertheless reverberated through the Royal Court inside the Washington DC Beltway.