David Codrea highlights an incident on the set of Tom Selleck’s television show “Blue Bloods” wherein Mr Selleck chastises a bit player for “waving a real gun around with his finger on the trigger”.

In news reports NRA Director Tom Selleck is cast heroically for his response to the extra’s faux pas.

Unfortunately, I cannot join the huzzah chorus in this instance.

Aside from the well established notion it is bad juju to publicly humiliate “the little people” the larger point should not be ignored as well: if you have joined a ship of fools about to wreck in the shoals it may make you feeeeel better to yell at the cabin boy but it sure will not keep the ship from capsizing!

As one message board commentator observed– it was the worst kind of Hollywood celebrity prima donna temper tantrum–all sound and fury with no productive outcome.

Yes, hardly a poster boy for on-screen displays of gun safety, hero Selleck has pretty big feet of clay. At the end of the day he is just one more Hollyweird drama queen who does not know squat about which he rants.

(Magnum PI –finger on the trigger TWICE in EVERY opening credit!) 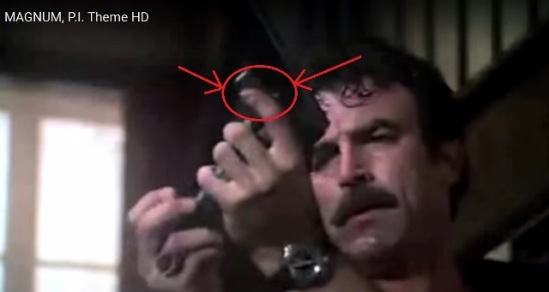 Finger on the trigger when he slaps in the magazine! Good thing the slide was not locked back! 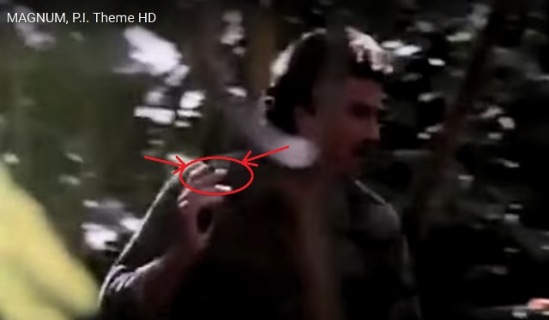 Finger on the trigger when he runs through the jungle! 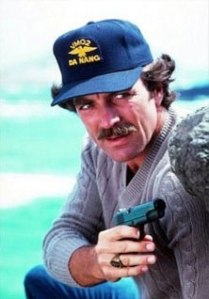 (So Tom, is your finger on the trigger because your front sight is on the target?)

If the situation on his show has gotten to the point an extra in costume is “waving a gun around” many, many highly paid staffers failed in their appointed duties before the extra even auditioned for the role.

While Mr. Selleck was correct to react with alacrity, his fury more properly is, and ought to be, directed toward both the prop master and producer of his show.

This is a clear-cut case of Pot. Kettle. Black.

Firstly, what kind of prop master does not find the time to instruct the cast and crew in the proper use of equipment on the set?

In fact, I believe weapons propmasters are a specialty subset of general propmastery for exactly that reason-to ride herd on the wide range of inexperience actors may have with firearms.

A certain mindset is required to properly manage weapons in the chaotic environment that is part and parcel of a typical production.

WM: What does a movie armorer do?
SK: A motion picture armorer is someone that converts weapons to blank fire, maintains them in working order, repairs the weapons both on set and at the armory, and INSTRUCTS ACTORS IN THEIR SAFE USE.

Lest a gentle reader think this is some idle armchair critique of the Hollywood dream factory allow me to revisit the tragic death of Brandon Lee.

Mr. Lee died when the propmaster of “The Crow” never cleared a “dummy projectile” from the barrel of a “blank gun” which was unused for over a week.

When said gun was loaded with a blank cartridge the projectile was propelled with sufficient force to kill Mr. Lee.

Weeks prior to the event, a scene was being filmed that required dummy rounds to be shown loaded into the handgun. Inexperienced crew members, pressured by time constraints, purchased live ammunition, removed the bullets, dumped the gunpowder, and then replaced the bullets back into the empty cartridges with the live primers still in place.

When the time came to film the scene where Michael Massee shoots Lee’s character, the same gun was loaded with blank cartridges.

Unknown to the crew, the bullet from one of the dummy rounds had become lodged in the barrel of the gun.

It is believed that someone on set was playing with the gun, pulled the trigger, and inadvertently caused the live primer to fire; this would have resulted in the bullet moving a couple of inches into the barrel of the gun.

When the gun was operated, the propellant in the blank rounds — which is used to give the visible effect of a gunshot — dislodged the bullet, which penetrated Lee’s abdomen and lodged in his spine. The injury caused massive blood loss.

As the production company had sent the firearms specialist home early, responsibility for the guns was given to a prop assistant who was not aware of the rule for checking all firearms before and after any handling.

Therefore, the barrel was not checked for obstructions when it came time to load it with the blank rounds.

Tom Selleck and all the cast and crew members of “Blue Bloods” are in grave danger if they tolerate incompetent armorers and sloppy weapon handling standards and practices on the set.

Secondly, must we, the public, continue to be subjected to ham handed acting by complete know-nothings in their roles as gunowners, police and military?

Seriously, an actor cast as a Police Officer who has NEVER handled a pistol in his life? (Actually, come to think of it, he might qualify as an “Only One”)

How many shows and stories are completely ruined for knowledgeable RKBAians when some actor or actress completely mishandles a common rifle or pistol?

What kind of Producer hires these people?

If ever there was an opportunity for Second Amendment Education this is it.

Attention aspiring actors and actresses: If your curriculum vitae does not include proper weapons training–rifles, pistols, atlatls–please do not apply for employment with our production!

Spread the wealth around Mr. Selleck! There are plenty of knowledgeable weapons savvy individuals who would love to be hired on the set of Blue Bloods and elsewhere.

Thirdly, with the nearly endless variety of facsimile weapons available in the professional show business market there is almost no justification for the use of a “real firearm” on any movie,television or theatre set.

There are even realistic airsoft pistols on the general market “that will get you killed” they are so difficult to distinguish from “real guns” even at close range. The slides rack, the magazines drop, the safety operates just like a “real gun”.

I have said it before and I repeat it here: Weapons are not toys or props, not for entertainment, relaxation or sport. They are tools to be treated with utmost respect whose purpose is to put food on the table or to disable some critter with four or two legs before they harm you or your loved ones.

If presented in an entertainment venue let them be portrayed in that light and no other.

Sorry Mr. Selleck, chalk up a demerit for yourself in this little tale.

You owe the bit player an apology. He has an excuse. He is an ordinary idiot. But your production staff and crew- what is THEIR excuse???

5 responses to “Tom Selleck No Hero”