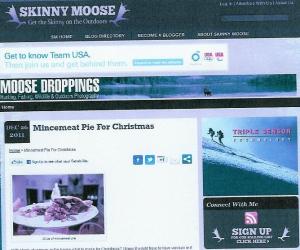 Skinny Moose explains Mincemeat Pie over on his blog:

With plenty of venison in the house what to make for Christmas? I knew it would have to have venison in it so that’s when I decided to try to make a Mincemeat Pie for Christmas.
Never heard of mincemeat? Well it is an old pie that is older than our country, and probably was made by some of the first settlers to travel over from England.

Mincemeat developed as a way of preserving meat without salting or smoking some 500 years ago in England, where mince pies are still considered an essential accompaniment to holiday dinners just like the traditional plum pudding. This pie is a remnant of a medieval tradition of spiced meat dishes, usually minced mutton, that have survived because of its association with Christmas. This pies have also been known as Christmas Pies. Mince pie as part of the Christmas table had long been an English custom.