Yes, there really are college level Rifle Teams! Yes, they really do offer college athletic scholarships!
Perhaps the day will come when it will be possible to watch them compete on the 2nd Amendment channel. (right next to the golf channel!)

Raleigh, N.C. — Deep inside the basement of Reynolds Coliseum, North Carolina State student-athletes are working on their shooting – rifle shooting.

NC State has the only fully-sanctioned, scholarship-level rifle-shooting team in the ACC. They are also fully coed with men and women competing against each other on a truly level playing field.

“If you look at the NCAA Championships, you’ll see roughly half men, half women,” said head coach Keith Miller. “Two years ago, TCU won the championship with an all-women’s team. First time that had ever happened.”

They may be the best team in the ACC no one has ever heard of – even on their own campus. 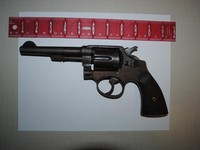 Thank Heaven it was only a .38 Special!

Jailers later discovered a .38 caliber, six-inch barrel revolver in the cell. It is believed that Ward hid the weapon in his rectum.

On Friday Ward will be taken to Onslow Memorial Hospital for possible injuries that may have occurred to Ward’s rectum.

Police say the gun was not loaded, but it was in operational condition.

Today’s video highlights an important distinction between actual military combat veterans (in opposite corners of the country) and the armed thugs who populate the United States law enforcement culture – the ability to carry out a necessary assignment with honor and dignity.

Most American citizens have never met the two most important people who have an inordinate unwholesome influence over the course of their daily life – the Police Academy Trainer and the University Law Professor.

For better or worse, the Academy Trainer and the Law Professor almost single-handedly determine the actual street level application of law.

So, for example, in the case of Law Enforcement, We, the Trampled, are burdened with the unfathomable concept of “officer safety” which cheerfully countenances the summary execution of family pets and sucker punched pedestrians on the slimmest pretext in the course of an ordinary encounter all because 9 out of 10 Police Academy trainers agree it is “a good idea”!

Or, in the case of the accredited Attorney-at-law, entire philosophical constructs of principle and theory are completely ignored by the Law School establishment in favor of ‘stare decisis’ and case law!

Which brings us to today’s video of a California Sheriff cold cocking a citizen without shame in full public view and the soldier who immediately spotted the violation of protocol embodied therein.

Unlike the modern patrol officer modern combat soldiers enter truly hostile and dangerous environments with a lawyer on each shoulder who eagerly await any opportunity to condemn them for any misstep -intentional or accidental. They accept the hazard as part of the assigned duty and perform fearlessly.

Compare that mentality to the “officer safety culture” which escalates the smallest encounter into a life threatening situation.

Thank you soldier for your service to our country both on active duty and off.

Anne Dekins was a loud-mouthed party girl — or at least, that’s what the arrest warrant suggested. Whatever she may have done in the past, Miss Dekins was quietly minding her own business when Officer Samuel Bray found her on the street and began to haul her away.

Dekins wasn’t inclined to go quietly, and she put up a struggle. Her cries for help attracted the interest of several armed men led by an individual named Tooley, who confronted Bray and demanded to know what he was doing to the frantic woman. The officer produced his official credentials and insisted that he was making a lawful arrest for “disorderly conduct.” When witnesses disputed that description, Bray called for backup.

Tooley and his associates ordered Bray to release the woman, and then took action to enforce that lawful order. After Bray’s partner was killed in the ensuing struggle, Tooley and his associates were arrested for murder. The trial court threw out the murder charge, ruling that the warrant was defective. Since the arrest was illegal, the court pointed out, Dekins had a right to resist – and bystanders likewise had a right, if not a positive duty, to assist her. The defendants were eventually found guilty of manslaughter, but quickly pardoned and set free.

By trying to enforce an invalid warrant, Bray “did not act as a constable, but a common oppressor,” observed the trial court. Tooley and the other bystanders were properly “provoked” by the act of aggressive violence against Anne Dekins, and their forceful but measured response – first demanding that the abductor release the hostage, then exercising defensive force to free her – was entirely appropriate.

Lawless violence against the helpless “is a sufficient provocation to all people out of compassion” in any circumstance, observed the court, “much more where it is done under a colour of justice, and where the liberty of the subject is invaded….” In fact, an act of that kind carried out by a law enforcement official is nothing less than “a provocation to all the subjects of England.”

For those of you concerned about the “State Of The Union” the last five minutes of this interview include the most uplifting comments I have heard in a while.

Glenn Beck talks to Andy Andrews (Andy Andrews is an internationally known speaker and novelist whose combined works have sold millions of copies worldwide.) about his new book “How Do You Kill 11 Million People?: Why the Truth Matters More Than You Think”